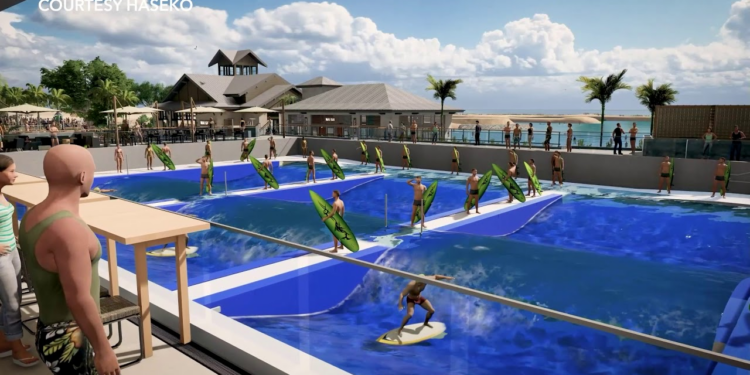 HECO profits from the massive power use and the planned Solar PV farms which will provide large amounts of electricity for tourist surfing fun. The Haseko project plans three wave pools with power from local PV farms and area battery projects. Another artificial surfing project is planned near Kalaeloa airport runway 22.
The average U.S. home uses about 900 kWh per month. So that’s 30 kWh per day or 1.25 kWh per hour. Surf wave machines can use 400 kWh of electricity to generate 720 three-foot-high cruiser waves in an hour.
Deep Dive: So how much energy does a wave pool use?
https://wavepoolmag.com/deep-dive-so-how-much-energy-does-a-wave-pool-use/
300 to 400 kWh per one-hour surf session.” Documents provided by Wavegarden show 400 kWh energy is used to generate 720 three-foot-high cruiser waves in an hour. The same document also shows it takes roughly 400 kWh to generate 340 expert waves at six feet high in the same timeframe.
Electricity is also needed for water treatment, and ancillary power (lighting, heating).
Endless Surf system uses 2.8 kWh for a head-high wave and 1.58 kWh for a shoulder-high wave, averaging out overall usage provides a better snapshot.
At the crux of the wave pool problem is general physics. It takes a lot of energy to push something as heavy as water.
“The basic premise in wave generation is you are moving water (64 lbs / cu.ft) above static water level to make the wave crest and also moving water below static water level to make the wave trough,” says OG wave pool inventor Tom Lochtefeld. “Imagine carrying all that water up or down to make a single wave? That is a lot of work requiring a lot of energy. There is no shortcut. Every wave generating manufacturer has this problem, and there is no magic bullet.”
To understand efficient energy usage in a wave pool we have to understand that it’s more complicated than simply flicking on a light switch. A light switch has two settings, on and off. The average surf park offers 4-to-5 wave settings and within those settings offers different wave sizes rolled out at different frequencies. So a beginner wave setting running just a few 2-foot waves per hour will use drastically less energy than an intermediate 4-foot-wave setting pumped out at 500-waves per hour.
“It’s really important to remember that when you calculate your electricity consumption it’s like calculating miles per gallon if you had a trucking company,” says Andrew. “There’s certain mileage where it’s from freeway driving and certain mileage when it’s done on a city street so your mileage will vary wildly depending on how it’s being used. If you were to take an average yearly usage with average American energy costs which is about 10 cents a kilowatt it works out to about 25 cents a wave.”
Another component missing from the energy use debate is how those kilowatt-hours are generated. Iceland uses 51,699 kilowatt hours per person per year, but the country is a wonderland of clean geothermal power. The average person in China uses roughly one-tenth of that at 4,617 kilowatt hours per person per year, but that electricity is powered by fossil fuels including coal.
The cost of a surf park’s operation depends on where they get their energy. BSR Surf Resort in Waco runs on the infamous Texas power grid which failed millions of Americans last February. The power grid in the Lone Star state allows users to pay wholesale prices that fluctuate with market rates if they so choose. This can mean less cost during low-use periods, but high costs during peak use demands. Rates are typically 2-to-3 cents per kWh but during the Winter crisis of 2021, some rates went up to $9 per kWh according to a report by the Associated Press.
One of the highest kilowatts per wave technologies is Kelly’s. To help compensate for such an energy-intensive system (dragging a hydrodynamically-challenged foil through a pool) the company is committed to purchasing energy from renewable sources like solar. A few forward-thinking wave tech systems in the development stage are exploring the use of energy generated from the methane gas released by decomposing waste matter.

John Bond is the president of the Kanehili Cultural Hui, a member of the Ewa History Project, and a past researcher for ex-Councilman John Berg. He has worked for the U.S. Navy in the mapping and topography field. Currently he does private research for organizations.